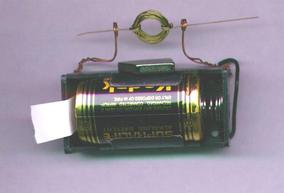 This is a Simple Model Of Electric Motor with a single brush.The model is not so fast enough but its speed can be increased by increasing the motor armature current i.e. increasing the supply current and using a magnet of low magnetism but sufficient to move the round core (armature).
Construction:
The construction is easy and require the following parts
If you feel the availability of parts is a little difficult involve your creative brain to obtain parts
To get the radio shack wire just look for an out dated Transformer in Electrical devices like Television,Radio etc.Be careful while removing the transformer core.The winding wire in the transformer would be a single lead wire with gold color insulation and this would be the best for Motor armature design.For a thicker wire you can use a single lead copper wire used in the Electric Power lines. A small Magnet can be easily obtained from the old speakers.Break out the other parts and remove the round magnet or the other option is that you can make permanent Magnet for yourself as described here.
Now after collecting all the essentials Start working out 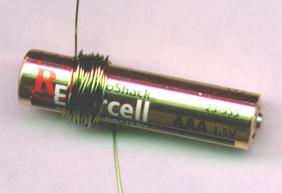 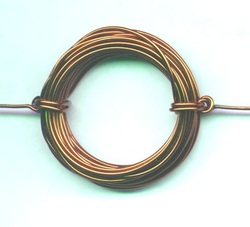 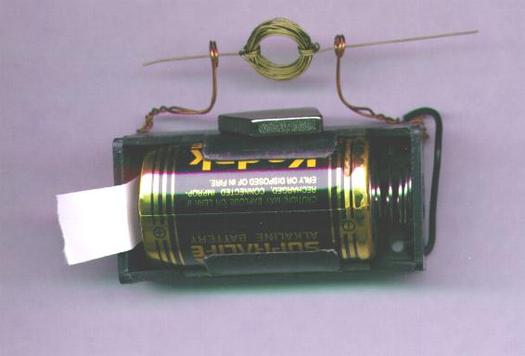 Working:
It is evident that when battery is connected current flows from +ve end to -ve end through the armature core.The armature core when its bare ends(insulation free ends) are in contact with the conducting supports current flows in the coil round the coil.This circulating current in the perpendicular magnetic field produces an Electromagnetic Force perpendicular to both the current direction and the magnetic field causing rotation.
The video clarifies you the whole process and also the direction of forces acting on the moving coil.
Force acting on the each turn can be given by
F=i(LXB)
where L is the length vector in the direction of current and B is the Magnetic field Intensity vector.i is the current through the armature core.Now total Force on one side turns is equal to
Total Force F=ni(LXB)
The same force on the other side of core  is equal in magnitude and opposite in direction.Thus this force produces a torque about the centre and hence the coil rotates.

Thus the above equation shows that by increasing the number of turns the force increases and hence the torque and thus the no.of rotations per second also increases but at the same time its weight increases and hence the core may not be stable(either due to centrifugal force or the structure may bend at the centre due to its heavy weight).So a limited no.of turns are to be made both sufficient to produce necessary force for rotation and that the core is not too heavy.

Why to remove insulation one half on both ends of the same side?